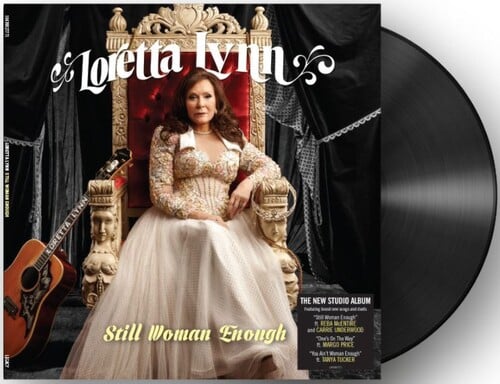 he American music icon's 50th studio album (excluding her 10 studio duet collaborations with Conway Twitty), Still Woman Enough celebrates women in country music. From her homage to the originators, Mother Maybelle Carter and the Carter Family (via her cover of "Keep On The Sunny Side") through a new interpretation of her very first single, "I'm A Honky Tonk Girl," Loretta Lynn acknowledges her role in the continuum of American country music while her duets with Reba McEntire and Carrie Underwood ("Still Woman Enough"), Margo Price ("One's On The Way") and Tanya Tucker ("You Ain't Woman Enough") find her sharing the musical torch with some of the brightest lights and biggest stars in contemporary pop-country.

The album premieres 13 new Loretta Lynn recordings, intimate and electrifying performances of a career-spanning selection of songs illuminating different aspects of her repertoire. The collection is centered around Loretta's original compositions--from new songs like "Still Woman Enough" (which shares its title and attitude with her 2002 autobiography and was cowritten with her daughter, Patsy Lynn Russell) through fresh interpretations of classics including "I'm a Honky Tonk Girl" (her first single, originally released March 1960), "You Ain't Woman Enough" (the title track for her first #1 Billboard Hot Country Album in 1966), "My Love" (from 1968's Here's Loretta Lynn), "I Wanna Be Free" (1971) and a deeply emotional "Coal Miner's Daughter Recitation," commemorating the 50th anniversary of the release of her signature song (October 5, 1970) and album (January 4, 1971).